Kyoto is a very nice, laid back, and peaceful city that is home to some of the world’s most incredible sights. We stayed there for 3 nights and I think we did everything we wanted to do. Just like Tokyo, the public transportation is easy to deal with, so don’t stress about getting to faraway places. We stayed in Gion- or Old Kyoto- the cutest part of town with stone paved roads and traditional houses, at Hotel Mume. We had a great stay at this hotel and I highly recommend it.

WHAT TO DO IN KYOTO

The Bamboo Forest is one of the most famous bamboo groves in the world and is worth every second of the long journey there. Once we arrived in Arashiyama we started hiking up the trail to it, but we definitely had to ask some people were to go because the signs were pretty confusing. When we finally managed to get there, I was flat out amazed. The bamboo was everywhere around us and even made a canopy above us. It was so peaceful because there were not many tourists. We took a bunch of pictures, but mainly just enjoyed our time there. Eventually, the path through the grove led to a temple and a zen garden. How calming can it get?!

Before you say any random temple in Japan is the coolest thing ever, go to Kinkaku-ji and I can assure you that you will change your decision. It isn’t just any old temple in Kyoto, but it is actually a golden temple. Covered in gold leaf, you can clearly see Kinkaku-ji from 200 feet away. It is definitely one of the most popular buildings in all of Japan, so come prepared to wait in the ticket line. It’s about a 10 minute taxi ride from the Bamboo Forest and also not far from Nijo Castle. Kinkaku-ji is obviously something you can not miss while in Kyoto.

After the walk from Kinkaku-ji, we arrived at Nijo Castle and started our journey with the museum about art and artifacts from the castle. It was really interesting to see the huge paintings and how simple, yet beautiful they were. After that, we kept walking around the black and gold buildings, looking at all of the detail in some of the walls and ceilings, occasionally stopping at other tiny museums, and catching snowflakes in our mouths when a quick storm appeared. Nijo Castle is an awesome thing to see while in that area.

Seeing Fushimi Inari-taisha was on the top of our list of things we wanted to do when we got to Kyoto. It is the most famous Shinto shrine in Japan. After walking through multiple huge toriis, a certain kind of Japanese gates, we reached the real entrance to the shrine. We walked through tons and tons of smaller orange toriis, all engraved with Japanese letters, and it really felt like a glowing tunnel. I have never seen anything like it and I was amazed throughout the whole walk. We eventually reached a stopping point where we lit an incense, waved in the smoke, and headed back to the bottom. Down where we started, there was a huge street market with people selling tons of Japanese treats. My sister and I both got mochi filled with a Japanese custard, and my mom got a treat called Taiyaki, which is a fish shaped pancake stuffed with custard. At this point we had really become obsessed with the cute and delicious Japanese treats! 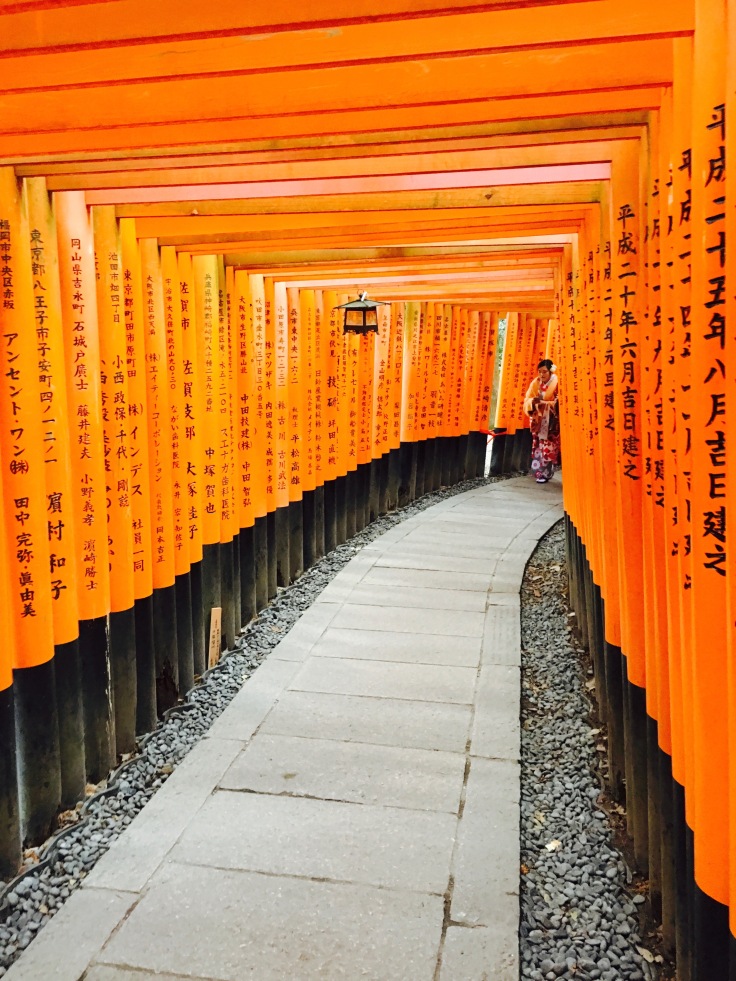 Aside from Kinkaku-ji, the Saihoji Temple was the most stunning temple in Kyoto. My mom had heard about this place, but it took a bit of work and a lot of advanced planning to get in for a visit. Thankfully when we got to Kyoto the special postcard saying we could go was waiting for us at our hotel. We arrived with 30 other people and the guards led us to the main room. We sat on a tatami mat floor with a little table in front of us that would help us write Japanese calligraphy. Eventually, after tons of Japanese instructions, the head of the temple, dressed in a purple yukata came in. Without saying a word, he started mumbling this beat chant, and all of a sudden, everyone around us had started with him. This intense prayer and drum beating lasted for probably 5 minutes straight, and then a guard told us to write a wish on the thin piece of wood in front of us. After we wrote it down, we were led to the gardens and did a full circle around the lake past lush, green moss that the temple is known for. After some time, the path ended and we were led out of the temple. It was something that I’ll remember forever, and if you have time before your trip, I highly recommend asking to enter the temple. 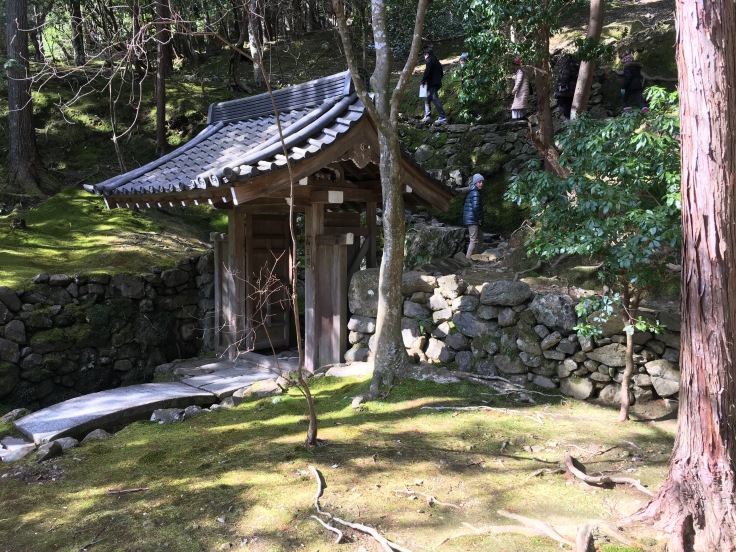 If you are looking for ramen, head right over to Ramen Sen No Kaze. It was so good that we went there 2 nights in a row! Just make sure to come prepared for a long wait outside that will probably add up to 2 hours. For tonkatsu restaurants, go to Katsukura. This restaurant is popular, but there is not a wait because they get your order while you are in line which speeds it up a lot. The best udon is definitely in the area of Arashiyama. We went to a small stand for lunch 2 times in a row, but we could not figure out what the name was. Although, I can bet that you will get some pretty good udon anywhere you go.

Transportation: Good train system throughout whole city. Also, there are a lot of taxis. Just try to get directions in Japanese for the drivers as much as you can. They really will not understand your English version of street names!

Weather: We went in the winter, which wasn’t very cold compared to the other cities. It never rained or snowed and there was always a blue sky.

Spotting geishas: From our research, we learned that geishas don’t like to be approached by tourists acting like paparazzi. If a geisha is in a hurry, then she is trying to get to work and shouldn’t really be bothered. But if you see one strolling around Gion and you ask kindly, she will likely let you take a photo.