Rome may be rather small, but it is full of amazing art, incredible architecture, engaging locals, and a year round energy that makes it one of the most beloved European cities to visit. Oh and please don’t get me started with the food. Whenever you turn, there are restaurants overflowing with people eating fresh pizza, pasta, charcuterie, gelato, and tiramisu. We spent five incredible days here, which was both enough and not nearly enough time. This guide will give you the best things to do in Rome which means non-stop adventure, but at a speed that is not overwhelming.

WHAT TO DO IN ROME

Without a doubt, the Colosseum is the most iconic sight in Rome. Other than just walking around it and enjoying the beauty, I highly recommend doing the tour with Dark Rome that is geared towards kids. Our guide was very interesting and knowledgable, which made for a great time learning and exploring the inside. She also took us to the Forum, where we were showed tons of ancient ruins, a beautiful garden, and the best view of the Colosseum.

I recommend to doing the afternoon Colosseum tour after completing Gladiator School in the morning. It is a very fun way to tie the history together. 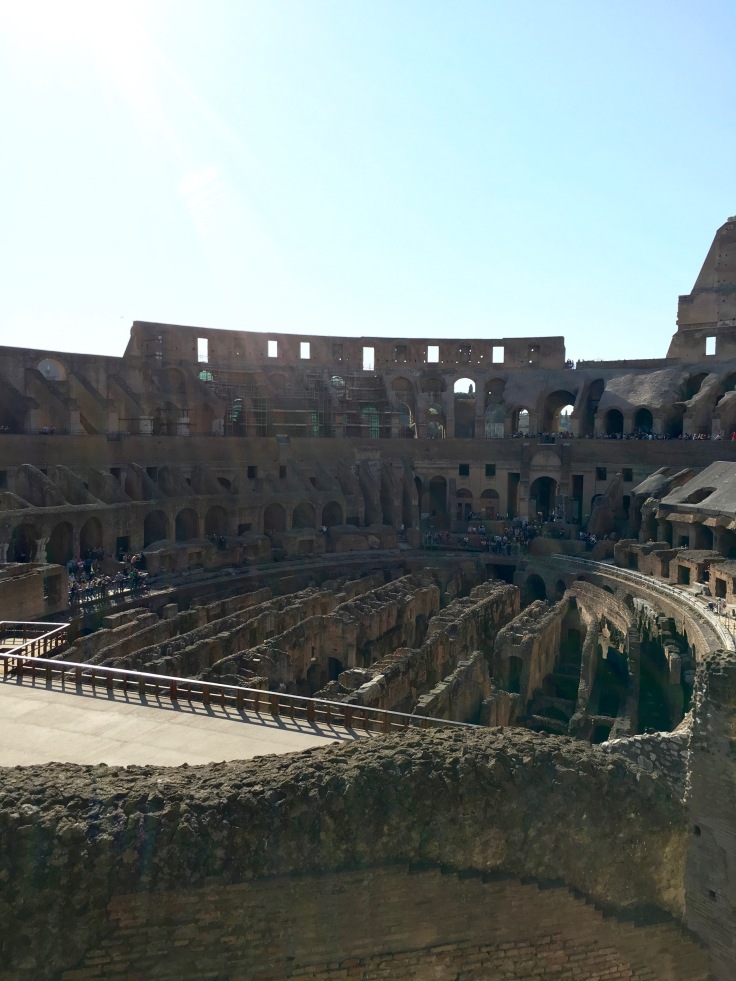 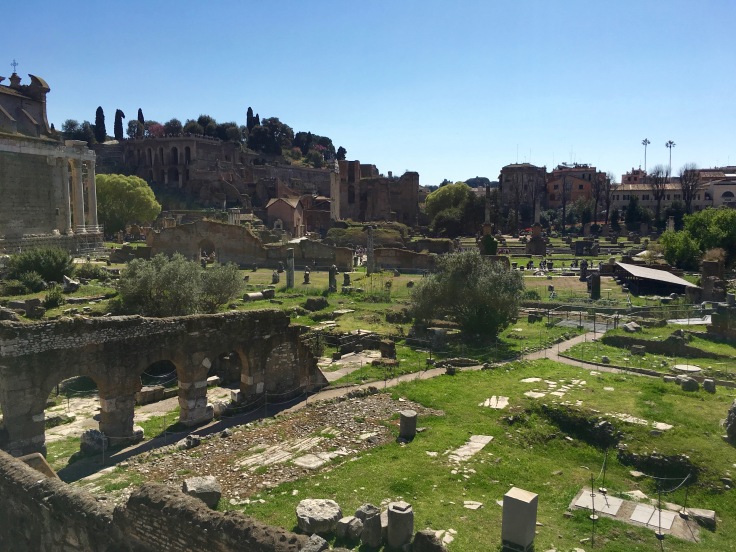 We went to gladiator school on our first morning in Rome. We learned all about Roman gladiators and also some fighting skills, which we got to display in mock battles against other kids in the tour. Our teacher was very informative and knew a lot about gladiators. His tour of the small museum was very interesting and I loved seeing the traditional armor. Our guide was a little old school because he made it clear that he thought men were the powerful ones while women were best for raising families and keeping the house. It’s not really a message I get from my family, friends, or my progressive education, but I still highly recommend this activity because it was very fun and also taught us all about a very important part of the ancient world.

Out of all the things we saw in Italy, the Vatican was definitely one of my favorites. From the beautiful museums, or museos (in Italian), the stunning Sistine Ceiling, St. Peter’s Basilica, which is home to the jaw dropping bronze altar by Bernini, and the smallest land mass for a country in the whole world, how could it not be?! We had a great tour with City Wonders which included seeing the Sistine Ceiling with barely anyone there. That did mean waking up at 5:30 for a 7am tour, but it was so worth it.

Climbing St. Peter’s Basilica wasn’t included, but we did it anyway and got the best view of the Vatican… after the dizzying and tight climb that led up to the observatory! 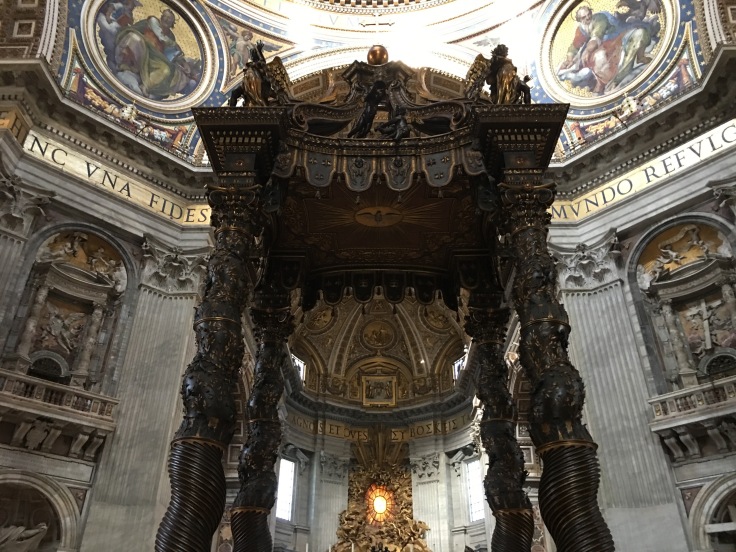 Researching pictures of Trevi Fountain back at home definitely got me excited, but it wasn’t until we turned the corner into Piazza di Trevi that I was truly in awe. I kept asking my mom if every slightly oversized fountain was Trevi Fountain and she just reassured me that when I saw it I would know. She was right! Unlike how I thought it would look, it was massive, detailed, beautiful, and literally one of the most astonishing things I’ve ever seen. Despite the large amount of tourists and selfie sticks, we made our way to the front and eventually flipped our coin backwards to grant us a trip back to Rome! Trevi Fountain is really a “must see” while you wander the streets of Rome… 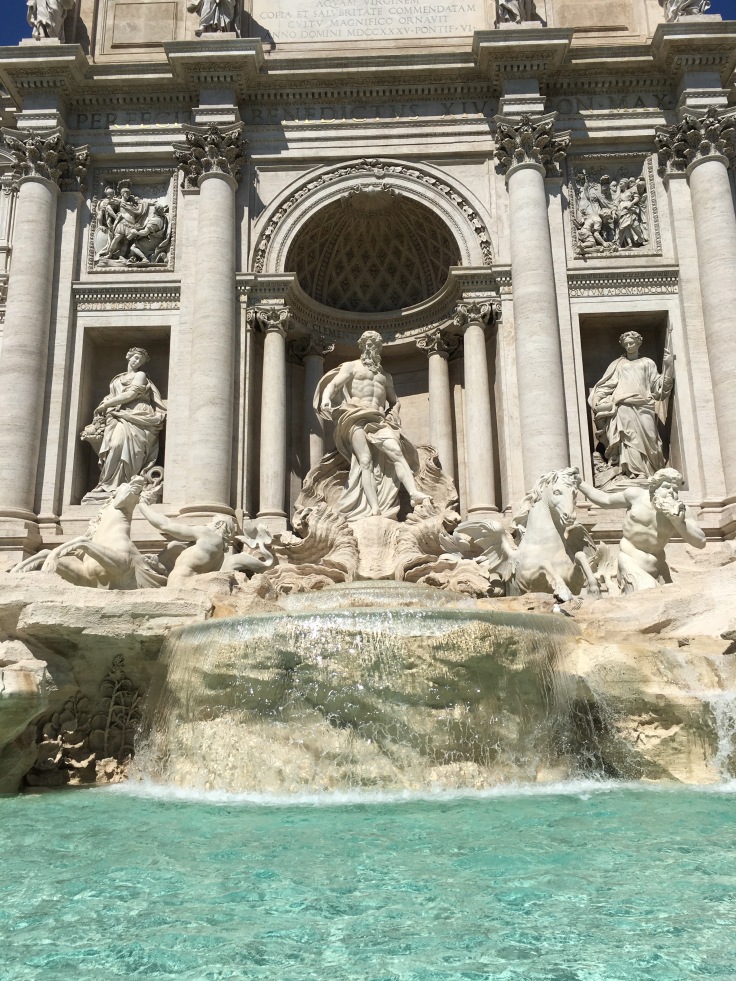 If you find yourself aimlessly wandering the streets of Rome and happen upon a dingy, soot colored, kinda simple looking church with a big crowd outside, you know you’ve found the Pantheon. The Pantheon was once a Roman temple, but was changed into a church by Pope Boniface IV in the early 1600s. My favorite thing about the Pantheon is the amazing dome shape and the hole in the roof that you can only see when you’re inside. We went once on a beautiful day and tried to go a second time during the rain, but the line was too long. I would really like to see it with rain pouring through the roof one day! 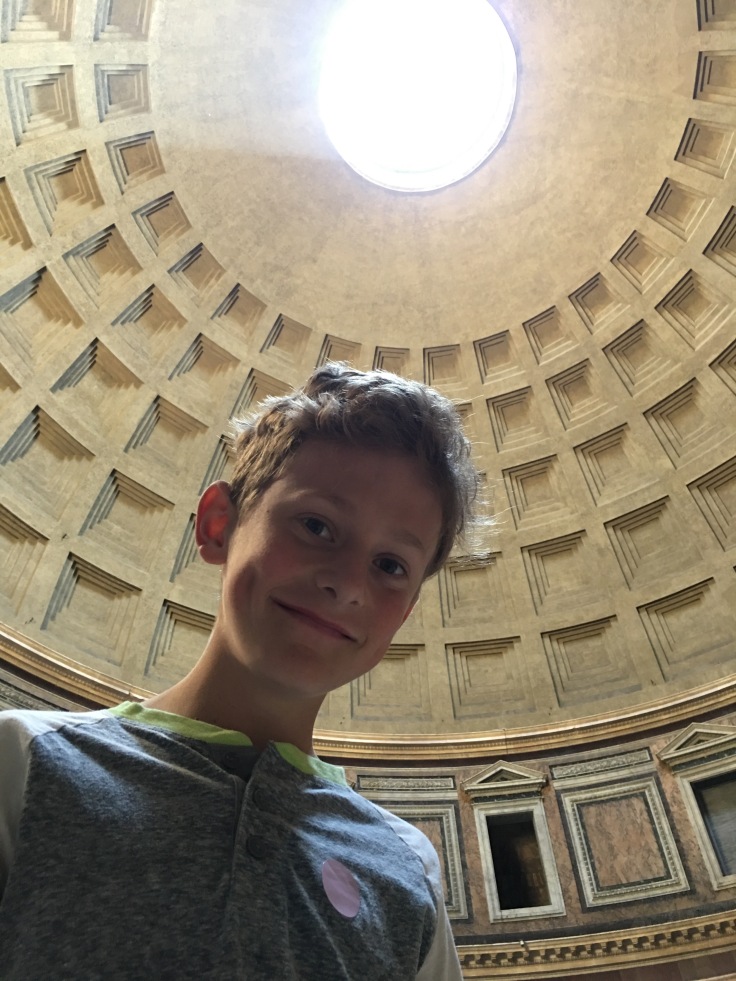 I don’t know about you, but I love soccer and everything to do with it from the World Cup to the cool jerseys each team wears. As soon as I knew we were going to Europe, I started researching games. I was so excited when I realized that we would be in Rome when they were hosting Empoli. Knowing the Italians take soccer very seriously, I was a little nervous that the 8pm game would get a little wild but it turned out to be an experience of a lifetime. We got to see Roma score 2 goals and take Empoli down! It was fun to be swept up in the excitement with all of the die-hard Roma fans.

Our apartment rental organized a cooking class for us in Rome – pizza and gelato. Yes! We went to InRome Cooking on our second night and had the best time learning to make two of my favorite Italian foods. Our first task was deciding what gelato flavors to make, which was pretty hard considering all of the good options! We all agreed on coffee, Nutella, pistachio, chocolate and vanilla. Then, we were on to the making of it, which involved everything from seperating the eggs, creaming the milk, and mixing all the ingredients before putting the gelato in the freezer.

When making the pizza, our chef started by teaching us how to make the dough. Trust me, as much as I wanted to learn how to, there was no way I’d remember all of those steps! Especially because he was talking grams and Celsius and other units of measure this American does not know.  But then we got to the rolling part and from there it was smooth sailing, except that my circle was starting to look sort of oval and jagged. But not to worry, the toppings covered my imperfections and the taste was delicioso!

Being one of the many piazzas in Rome, Piazza Navona is big, beautiful, and home to a beautiful fountain… and also tons and tons of tourists and sellers trying to convince you to buy selfie sticks and junk toys. Without a doubt, you have to see it while in Rome, but we didn’t spend much time there, partly because we were threatened by a seller who got chased away by the police! 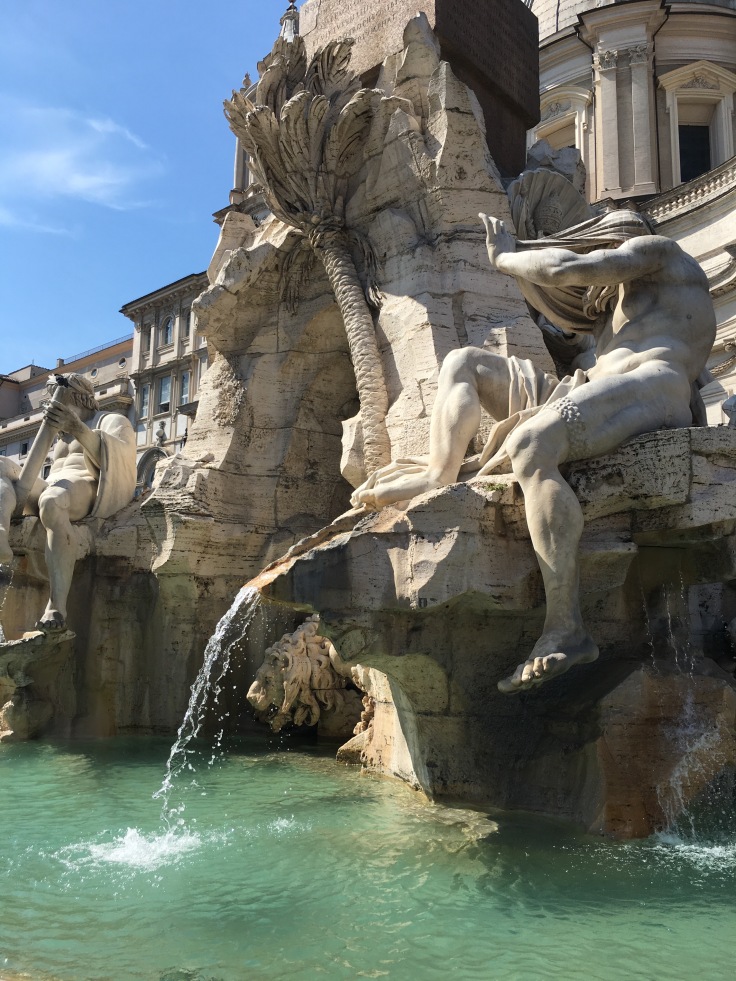 On a beautiful day, like the sunny day we went, the Borghese Gardens is a perfect place to take a break from the hustle and bustle of Rome. We rented a golf cart and drove around, which we felt pretty lazy doing, but trust me it is worth it- the gardens are huge! We stopped at a panoramic observatory and the Borghese Museum. Once we returned the golf cart we walked over to a roller skating show where we saw Franco, an old man, skate and do the splits under a rope that was only a foot off the ground! Now that is called a skill!

Located on the west bank of the Tiber river, the area of Trastevere is a great place to walk around on a nice day. The little neighborhood is home to tons of nice, traditional streets, “pop in” gardens, and some very good restaurants including my favorite, Da Enzo. One of the best ways to explore this place is honestly just wandering through the tight streets without having a real destination!

Weather: We went in Spring and had great, not too hot weather. Winters are pretty wet, and summers are very hot.

Transportation: To be honest, Rome is a very easy city to walk around. We took a few taxis here and there, but mainly used our feet!

Dont get me wrong, The Spanish Steps are definitely beautiful and I’m glad we saw them. But I wouldn’t recommend spending a lot of time there because it’s really touristy!

2 thoughts on “Your Five Day Guide To Rome, Italy”