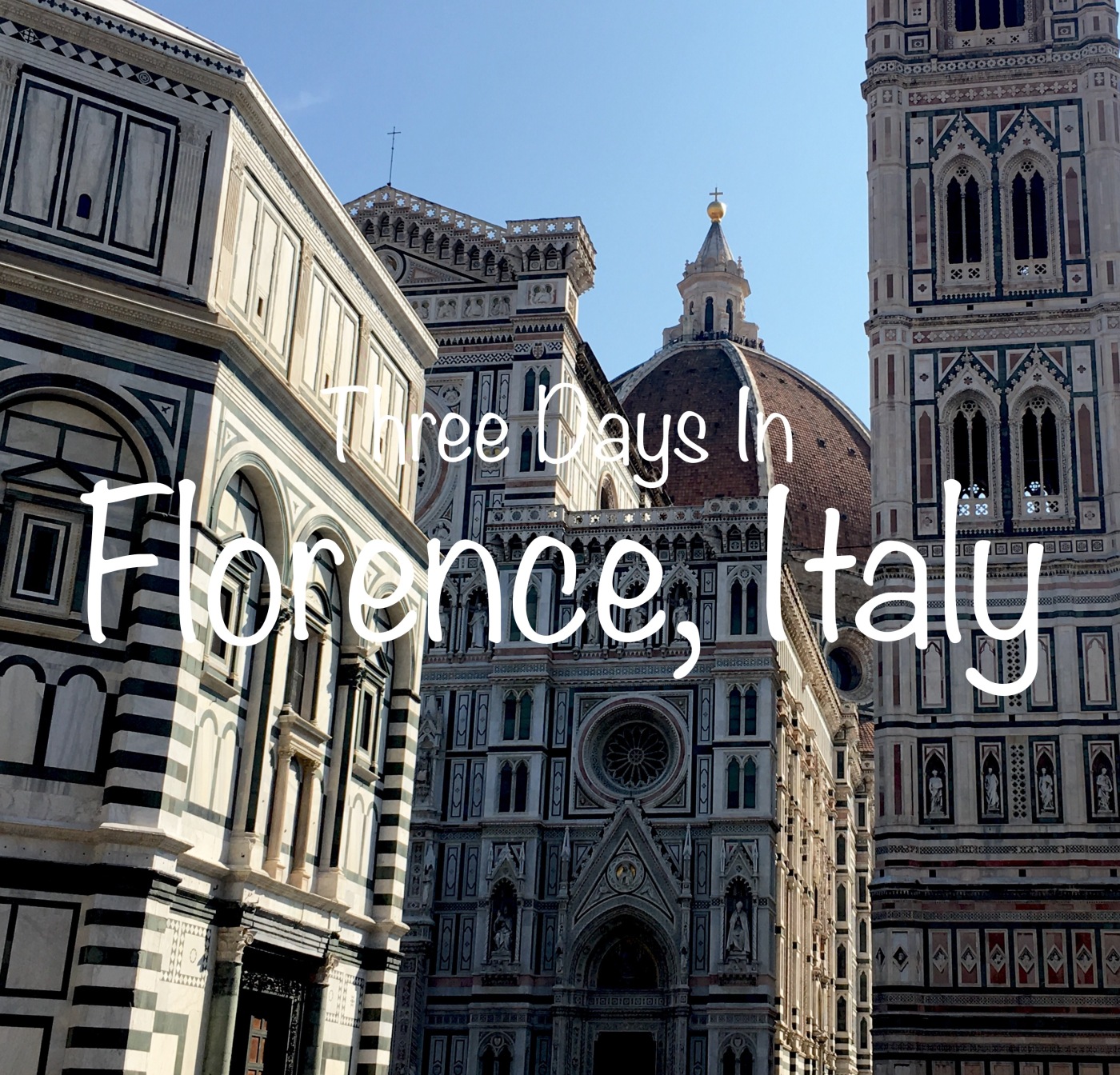 Florence, to me, is one of the greatest cities in the world. Because it is the birthplace of the Renaissance, you will find incredible art and architecture, jaw dropping views, an amazing taste of Italian delicacies, and an all around magical time. Because we only had three days in Florence, every day was packed with activities, sightseeing, and exploring different areas. This guide will give you everything worth doing, eating, and seeing in the most beautiful 72 hours of your life.

First things first, let me share that we stayed at Hotel Tornabuoni Beacci, which is a cute little hotel right on the Via de’ Tornabuoni. We were close to a lot of the major sights, as well as the Arno River. Other than the perfect location, I loved sitting outside on their bougainvillea covered rooftop, from which you can see Florence’s beautiful brown roofs.

What To Do In Florence.

Without a doubt, going to Accademia is a must while in Florence. If you may not have known, Michelangelo’s David is there, just waiting for you to see him. In person, he was even bigger than I thought, but the most unbelievable part is all of the detail put into him. As small as they may seem, you can actually notice the veins in his hands or the massive shape of his calves because Michelangelo put so much time into making it perfect. Beware that Accademia is so popular that there can be lines up to two hours long outside of the gallery. I highly recommend making a reservation!

After going to the Accademia, we decided to climb the beautiful Florentine Bell Tower. We were thinking of climbing the Duomo, but then it came down to do what we want to see from above; the Duomo or Giotto’s Campanile? After waiting in a 15 minute line, we purchased our tickets and headed straight up the narrow stairs which eventually led to a couple of “low” observation decks. At the 278′ high deck, I was flat out amazed… I mean, how could I not be? Right in front of us was the unbelievable Duomo, and behind it, the city of Florence and its brown roofs stretched as far as the eye can see. Trust me, I’ve been to the top of Hallgrimskirkja, Tokyo Tower, and many more, but this one really took the words out of me!

Not only is Santa Croce another amazing building covered in green and pink Florentine marble, but believe it or not, it is actually the church where Michelangelo, Galileo Galilei, Rossini, Machiavelli, and many other famous figures in early Florence are buried. If you’re wondering why Dante, one of Italy’s most famous poets, is not buried there, well, it’s because he talked badly about the Pope and was buried in a nearby town, Ravenna. Along with having a big sculpture of him looking angry right outside of the church, his empty tomb is actually still there and Florence hopes to get his body back from Ravenna one day.

On the inside, as well as having lots of tombs of people scattered everywhere, Santa Croce has a big, beautiful, shining altar that is also worth the visit. One way or another, do not miss out on this wonderful church. 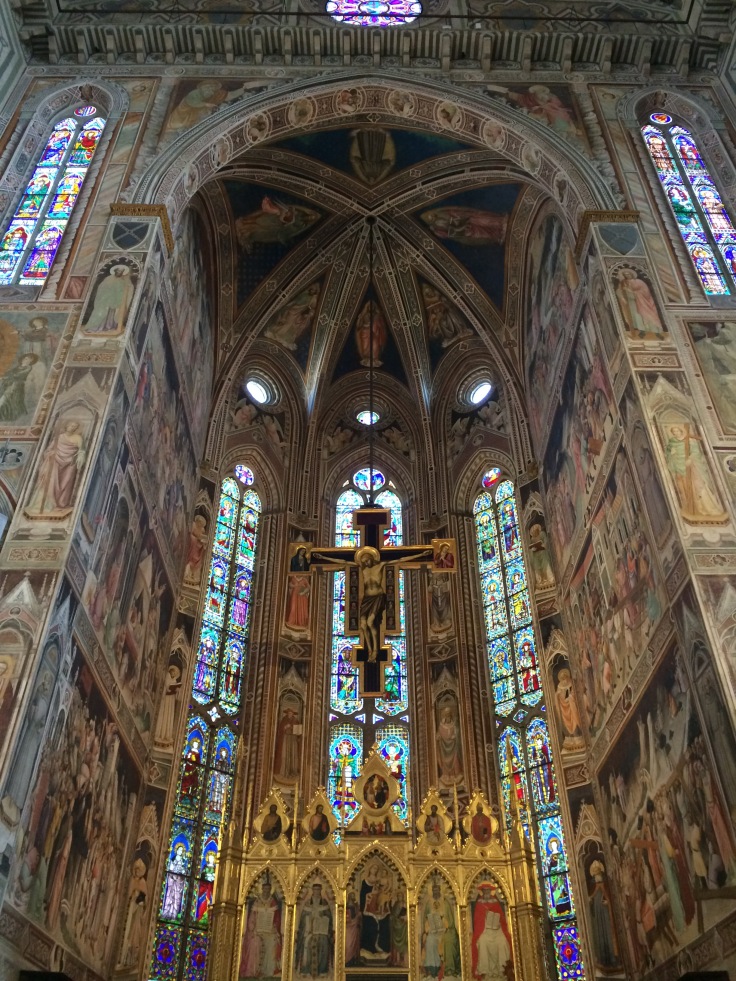 Florence is a small little city, so besides the cobblestone streets and the crazy drivers, seeing the city by bike was a great experience for us. No matter where we were, our English – speaking guide was very knowledgeable and taught us everything from Florence’s architectural history to the intricacies of the wealthy families. During our 2 hour tour, we stopped at the Duomo, Santa Croce, Santa Maria Novella, Medieval Square, The Pitti Palace, and even a gelati place called Gelateria Pitti that was great!

Without a doubt, the best views of Florence are at Piazza Michelangelo. We had heard and seen pictures of this piazza before our trip, and trust me, it was even more beautiful than I imagined. After trekking our way up the hills and gardens, we reached the observatory and could see the Duomo and Giotto’s Campanile, along with the sea of brown roofs! 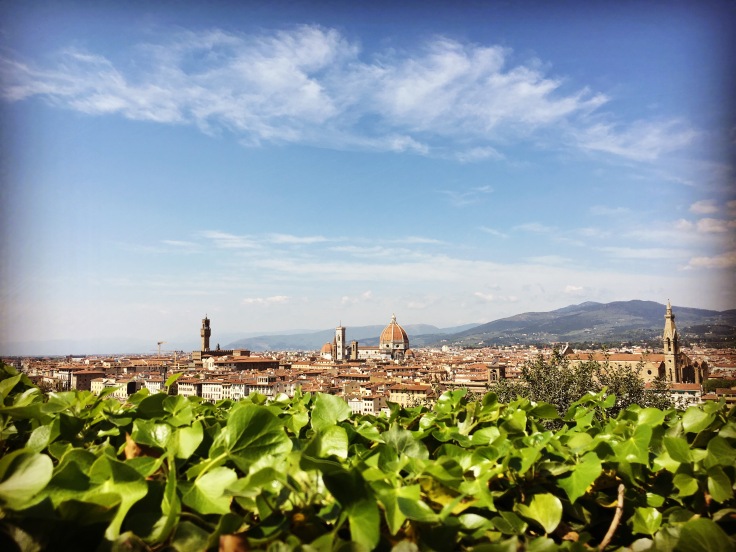 The Pharmacy of Santa Maria Novella is very famous for being the oldest running pharmacy in Europe today and even has recipes as old as 800 years old being sold. That being the case, it’s pretty touristy and other than the architecture and secret chapel, it’s rather modern and not very unique. But like I said, the secret chapel and its beautiful art is totally worth seeing!

San Lorenzo may not be the prettiest church, inside or outside, but the fascinating part about it is that every principal member of the Medici family is buried there. While this church is definitely not a must-see, the basilica which has a separate entrance,  is worth a visit!

Also, just around the corner is a great market where we chowed down on delicious prosciutto sandwiches!

During our bike tour, we were lucky enough to bike through Ponte Vecchio and experience the inner part of the bridge, and I would definitely recommend at least walking through it. While walking across the bridge nearest to our hotel, we got to see the bridge from afar, which meant taking in the crazy stacked architecture that was common in the mid 1300s. This particular bridge has a great story of why it was saved from German bombing during WWII.

Where To Eat In Florence.

Located about a block away from our hotel, Trattoria Sostanza is a delicious local restaurant and a perfect place to eat after a long day. We arrived at around 7:00 pm, and luckily got a table before it filled up with all the locals. The service was surprisingly very good and fast, which was unexpected, since we’d learned that the Italians love taking their time! I got my favorite Italian delicacy, gnocchi, and devoured it, but could barely walk home I was so full!

Because my mom studied in Florence, she knew all the hidden food gems, so after our bike ride, we headed right over to a local sandwich shop, Antico Noe. Out of the list to choose from, I happily got the sandwich with prosciutto, mozzarella, and olive sauce. While we waited in the small old shop, we talked to one of the really nice chefs who was teaching us a little Italian. Once our food was ready, I immediately fell in love. I don’t know if it was because I was starving or because it was our first sandwich in Italy, but it was definitely one of the most memorable lunches I’ve had in Italy so far.

Trattoria Sabatino was another one of my favorites in Italy. The joint was pretty tucked away on the Oltrarno and was filled with locals. We were one of the first ones seated when it opened at 7:00 and we got our food actually 5 minutes after we ordered! The pasta bolognese that I got was so good and fresh, and we also had a delicious dessert – torta della nonna – or grandmother cake in English.

Located just around the corner from San Lorenzo Church, the well known San Lorenzo Market is the perfect place for Italian food lovers to wander about. There is a long line of stores selling leather purses, hats and other accessories up to the food market, but you have to make sure you’re getting the good Italian leather and not the stuff from China. The indoor market overflows with stands selling everything from dried fruit to cow stomach! After snacking on some dried papaya, we found a delicious shop known for their sandwiches. Knowing me, I obviously got their prosciutto and mozzarella sandwich and devoured it. We accidentally didn’t catch the name of the store, but I’m sure you’ll come across it or something equally delicious in this market.

Not only was Baldovino our last dinner in Florence, but it was also our last dinner in Italy. So, it had to be good. When we arrived to the small restaurant right across from Santa Croce, we were seated right away, got some food recommendations, and ordered our last fresh Italian delicacies for a while. We got their margherita pizza to share and then each got our own meal… which was cacio e pepe for me! Man, it was so good! The pizza was crunchy and flavorful and the pasta, well, it was flat out insane! For dessert, we got their tiramisu, which made the meal one of the best in Italia.

Gelateria La Carraia is by far the best gelato we had in Italy. By far. Located right by the river, this gelateria is 100% worth going to even if the line is down the block. After walking back from Piazza Michelangelo, their crema and tiramisu in a chocolate dipped cone was to die for. Now I’ll tell you again… do not leave Florence without going to Gelateria La Carraia at least once.

I know, going one day without gelato is almost impossible in Italy. But keep in mind that there are also treats like granita, which is fresh Italian ice, that are completely underrated and the perfect way to refresh on a hot day. Carabè, a local store just down the street from Accademia, does sell gelato, but are more known for their granita, so I decided to give it a go. I got their Sicilian flavor which was basically orange, lemon, and lime all round up into one delicious slushy!

As part of our bike tour, like I said before, Gelateria Pitti was a great local shop that served delicious flavors. I got their crema, a traditional flavor of cream and lemon, and absolutely loved it. If you ever find yourself by the Pitti Palace, I definitely recommend crossing the street and enjoying a treat at this great shop.