Cuba is unlike any other country that I have ever visited. On one hand it is entirely imperfect, dirty, and rundown, but for some reason when you visit all you see is its beauty. It’s impossible not to be swept up in the music, the welcoming smiles of the Cuban people, and the brightly colored architecture. You can feel the heart of the Cuban people and the culture when you are there and it is completely captivating.

In the capital city, Havana, you could spend your entire trip just walking around and admiring the local kids playing soccer on the rubble-filled roads, the street vendors selling the most sweet, juicy mangoes, pineapples, and papayas, and of course, the old cars cruising along past the delicate, bright houses.

In this post I will give you the ultimate travel guide to Havana, which includes where to stay, what to do, and where to eat.

When it comes to traveling in Havana, finding the right place to stay is crucial. After booking a room in a “five star” hotel for our entire stay, we did some research and decided upon canceling that reservation and staying in a casa particular. A casa particular is similar to an AirBnB, except you live with the person you rented the house from and the casa is approved by the government for rentals. We stayed with the sweetest lady named Liña who made our stay so much happier and more exciting. For $5 a day, she made us an incredible breakfast spread with every known tropical fruit you could imagine, eggs, and bread that she got every morning. She was always looking out for us and telling us how to stay safe. While these apartments aren’t very luxurious, at least in our case, it was incredibly clean and comfortable.

After reading reviews of locals hotels and hearing some first hand accounts from friends, I think that staying in a casa particular is definitely the way to go in Cuba.

Havana is quite small, but I would still recommend staying in Old Havana, which is the more traditional neighborhood.

Out of all the beautiful architecture in Havana, El Capitolio, the capital building, is the most iconic and historical. Up until the Cuban Revolution, the building was home to the organization of the government and was certainly the most important building in all of Cuba. Although we did not go inside of it, it is a perfect place to walk around on a nice day.

Go to the beach

Cuba is surrounded by beautiful water and magical beaches. There is nothing better than  relaxing on the white sand or swimming in the turquoise water on a hot day in Havana. We went to the most amazing (and popular) beach called Santa Maria. We spent a few hours there and had a great time.

To get to and from the beach, we took a twenty minute bus ride from the center of town to a hotel right off of the sand. We got to the hotel and needed to find a bathroom, but realized it was two stars and practically abandoned. We saw one person in total and every single room had ripped curtains covering the windows. It certainly gave us a scare, so I recommend not walking through it!

Beware that in Cuba, everything runs a little loose, meaning the bus might not show up on time and you will have to wait for twenty minutes in the middle of nowhere looking for your ride. This happened to us, and even though we were flustered, that’s just how Cuba is.

The Museo Nacional de Bellas Artes de La Habana is certainly one of the most astonishing art museums the Caribbean has to offer. It is home to amazing artwork featuring pieces of Cuba’s history, culture, and present day. Artwork done by Raúl Martínez to Rafael Blanco scatter the halls of the beautiful museum.

Each floor of the museum shows art from a different time, which is a really cool way to see how Cuba’s art has changed over time. The Museo Nacional de Bellas Artes de La Habana is a must see while in Havana.

The Museum of the Revolution is a great way to learn more about Cuban history. I am not the biggest fan of museums, but this one blew me away. Inside the amazing building, there was so much to learn and see about the Cuban Revolution and all of its propaganda. I was amazed by the history of discovering Cuba and all the drama with the presidents assassinations and attacks. We learned about Fidel and Raúl Castro’s story and the country’s journey to socialism.

Plaza Vieja is a nice space to walk around, get a bite to eat, and relax while listening to Cuban music playing on the streets. It is located in the more modern, developed, nice part of Havana where all of the cruise ships arrive. The streets are much cleaner, shops are more delightful, and there are more musicians playing on the road. In the plaza, we went to the cutest cafe called Cafe Bohemia for a bite to eat before exploring Plaza de la Cathedral, which was close by. 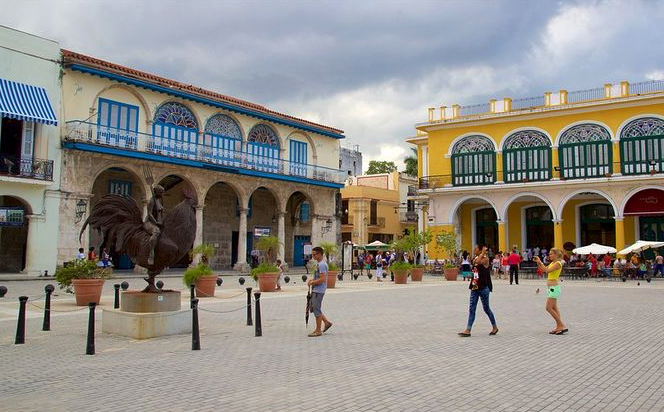 Before we left for Cuba, we had heard that the food was bland and not very good. People told us that all Cuba has to offer is black beans and rice and maybe we should bring our own salt. That is not true at all. In recent years, there has been a major shift in the Cuban restaurant scene. Cuban chefs are opening up restaurants selling more modernized food, such as tapas, tacos, salads, and much more. We thought the food was really good, especially after such dire warnings!

El Chanchullero is one of the best tapas spots in Havana. We stumbled across it after walking around El Capitolio and decided to give it a try; after all, the line was giant! We ordered their famous toast with some sort of salad salsa on top, pollo croquetas, a salad with pork, and a salad with egg. It was absolutely DELICIOUS. All of the food had so much flavor, which made it hard to stop eating.

Restaurant Van-Van is an incredible spot with a great vibe. It is a cool little boutique building tucked away from the chaotic streets near the capital building. We enjoyed their delicious (virgin) piña coladas, croquetas, ropa vieja, and beautiful architecture. The service was good and there was a little local band playing inside, which made for an incredible night all around.

Like all the other restaurants we went to in Havana, El Dandy’s food was amazing. Just down the block from El Capitolio, and right next to El Chanchullero in fact, the cafe’s boutique architecture, tasteful style, and delicious food made it one of the most memorable restaurants we went to. We all shared plates of tapas consisting of pollo croquetas, rope vieja, and tacos.

El del Frente was a delicious Cuban tapas place along the streets of La Habana. I started with a refreshing watermelon slushy and later got three pork tacos that were HEAVEN. The thing I loved most about El del Frente was how it was located on a rooftop which really simulated a Cuban rooftop

On our last night in Havana, we walked down our street to one of the fancier restaurants in town, La Guarida. Leading up to the restaurant was a beautiful flight of stairs and a mural of Fidel Castro. The building was practically crumbling from old age, but it was still beautiful. We went to the top floor to look out over Havana and have a drink, which was very nice, and then went inside to have dinner. It was a perfect way to end our trip in Havana.