Reykjavik, the capital of Iceland, is a small Scandinavian city that is perfect for travelers who want to have an easy-going time in a city that loves their visitors. In Reykjavik, there are tons of historical sights, as well as a lot of fun activities. Also, the city is not far from mind-blowing waterfalls, volcanoes, and black sand beaches.

In Reykjavik, the most popular activity is the Blue Lagoon, which is a man made hot spring that ranges from 99 to 167 degrees fahrenheit. It was an all around great experience for us kids, and there were not too many people when we went in late August. In the middle of the  lagoon, you can find spa treatments, little waterfalls that almost give you a massage, and a drink shack that helps you cool off from the hot bath. We, the Americans, thought it was absolutely hilarious that the drink shack sold some sort of Icelandic icee called “Krap.” Man, the face of that irritated cashier when we annoyingly said, “Excuse me, do you know what Krap is?” 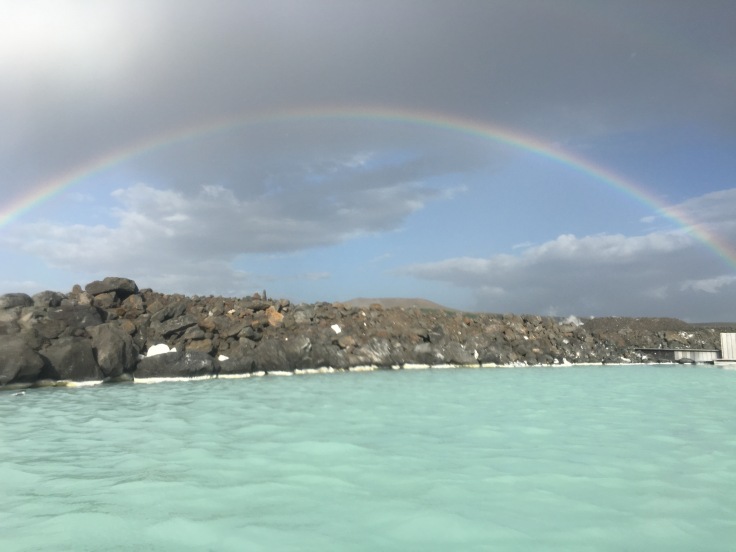 Thingvellir National Park is a huge park specifically known for the intercept of the North American and European plates. It’s not a far drive from Reykjavik, but we drove around a gazillion round-a-bouts and I was literally getting dizzy. Although, once we got to Thingvellir, it was worth it!

Hallgrímskirkja is a beautiful church right in the middle of Reykjavik. I have really never seen anything like the design which looks like a gray rocket that just sits there, right in the middle of town. Inside, you can buy a ticket to go to the top and look at the cute city of Reykjavik from above. From the room at the top, you can see every house in Reykjavik, and all of their Dr. Seuss-colored roofs.

If you’re looking for the most well known hotdog place in Reykjavik, go to Baejarins Betzu Pylsur, which is pretty much a red shack that serves absolutely delicious Iceland-styled hotdogs. Although, as far as the experience went, we had a horrible time.

This shack was our very first stop after we got off the airplane super late at night in Reykjavik. My sister and I are really scared of drunk people, and since we got to the shack at 2 am, there was likely going to be one. So, just as we were about to leave without incident, down came a nicely dressed lady who could barely stand up. She was shouting Icelandic while she raced towards our car which we had just gotten into. Right as I thought we were safe, she immediately grabbed the car door and tried to open it. Repeatedly! Luckily my mom saw her coming and had locked the door in the knick of time, but that experience scarred me for life!

Fiskmarkadurinn is a rather fancy restaurant that is well-known for its fish and tasting menu. In LA, where I live, I pretty much only get salmon sushi, so it was definitely hard to get used to other fish. After picking at some sort of octopus, I got arctic char, which was really fresh and flavorful. If I was really adventurous I could’ve tried whale or puffin, like the people sitting next to us. Truthfully, it made me a little sad to see people eating whale,  but I know it’s just part of the Icelandic culture.

“Pizza With No Name”

After eating at this restaurant, I finally understand why it’s called “Pizza With No Name!” Because the pizza is so good, you even can’t describe it! I never thought that Iceland would have such a delicious slice of margherita pizza. It was really a score for our pizza-loving family after our long drive back from the Blue Lagoon. Although, my 10 year old sister was so wiped out after the hot waters, that she didn’t eat and was practically sleeping on the table!

Every morning that we were in Reykjavik, my mom, my sister, and I went to Braud & Co. for their amazing pastries. Then we would wander up the street to Reykjavik Roasters where my dad would get his daily coffee. Braud & Co. is probably the best pastry shop I’ve ever stepped foot into, and Reykjavik Roasters is a cool-vibe coffee shop.

PS: If you go to Braud & Co., get their yummy cinnamon roll that is 10 times better than every gross, sugary American cinnamon roll.

Transportation: Rent a car! Pretty much no public transportation throughout the whole country.

Weather: Warmest weather is in July and August