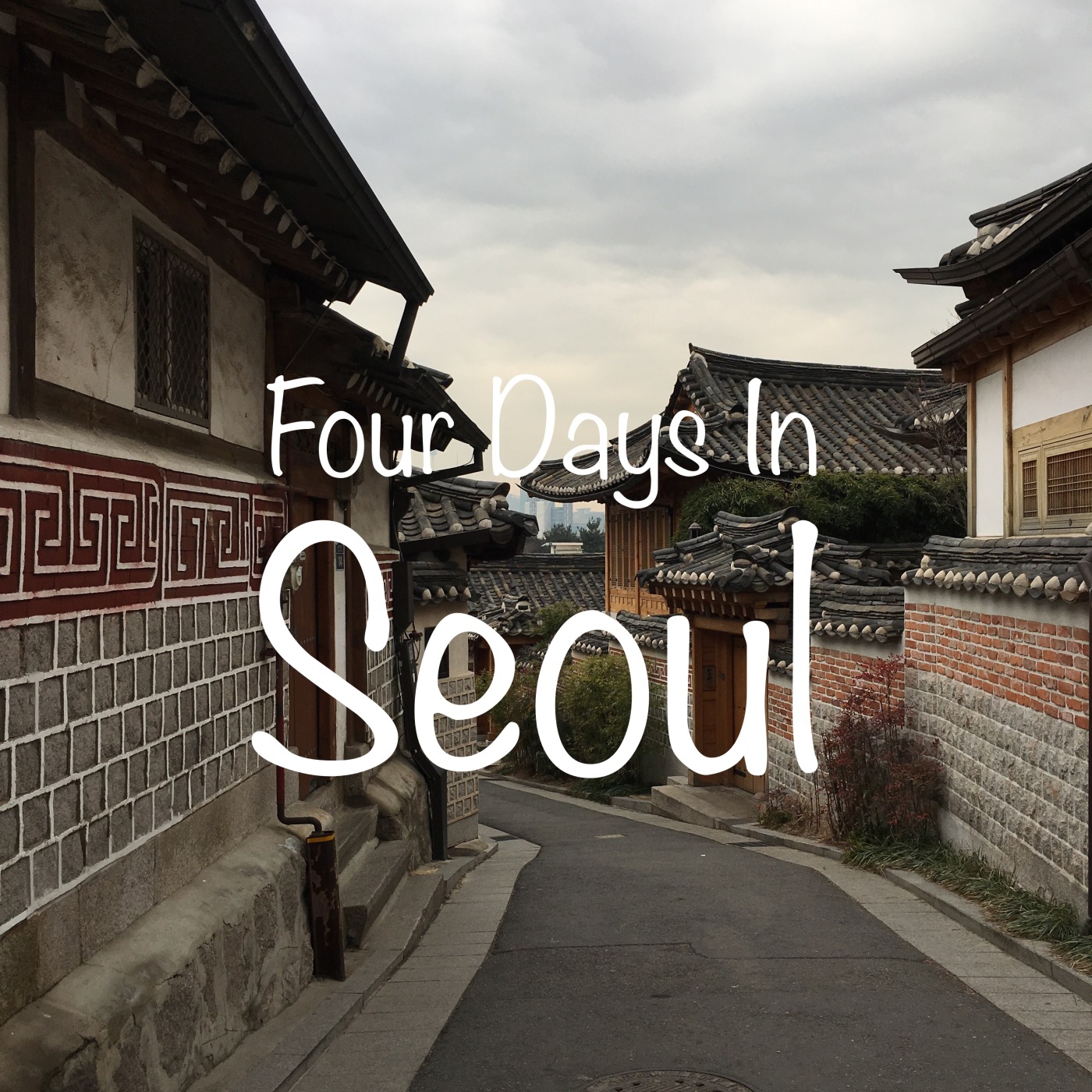 Seoul is a very bright, busy, high tech city that is not at all like Tokyo. The city is home to many typical “Asian” street markets, meaning motorcycles zoom around you, people are yelling at you to buy their food, and has a dirtier vibe than clean, civilized Japanese markets. Aside from all of the amazing people, culture, and food, Seoul is actually known for its crazy fast internet and wifi. We learned that Seoul’s wifi and internet speed is 50 times faster than the United States and is ranked in the top ten for fastest in the whole world. Crazy right? As for where to stay, I recommend staying in the area of Gangnam (you might recognize the area from the song “Gangnam Style”) because it is a great part of Seoul and close to a lot of amazing stuff.

WHAT TO DO IN SEOUL.

To start our trip off, we did a street food cooking class with OME. Once we managed to get out of the hectic train station, one of the ladies that works for the cooking class was waiting for us with a couple of other people. Before she led us to where we would start our class, she took us through an old market to get a sense of Korean food. As motorcycles raced around us with 4 people on them, she showed us traditional spices, seafood, and herbs, and took us behind a stand and showed us how the owner makes sesame oil.

Once we got back to the house, we immediately washed our hands and started preparing ingredients. After we did all of the work, it was finally time to eat the 5 dishes that we made. I started with kimchi that was so spicy it almost burned my tongue off. It was still delicious. Then I moved on to japchae, a kind of Korean noodles, gimbap, otherwise known as Korean sushi, some really spicy Korean soup, and a Korean pancake filled with vegetables and meat. It was all so good and I highly recommend booking a cooking class with OME. 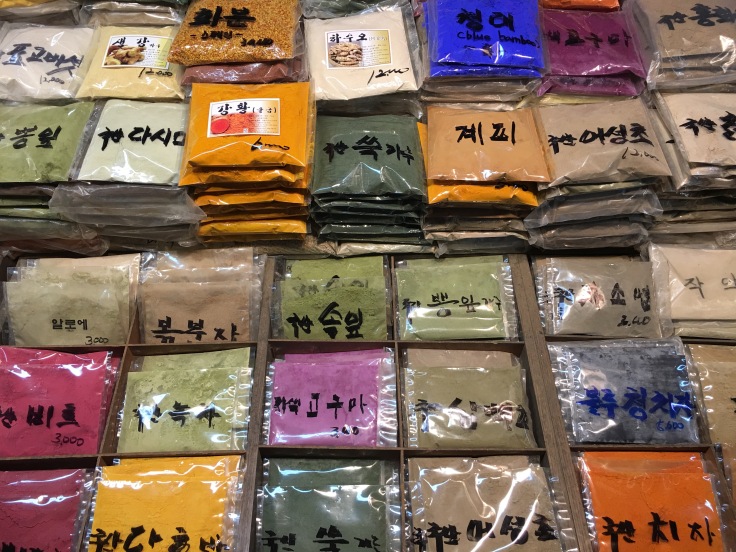 If you’re looking for a fun amusement park to go to, I recommend Lotte World. The lines were really long, so we were limited to 3 rides, but they were all worth the wait. The first one we went on was called The Giant Loop, and after we got buckled in, we zoomed up a loop that would flip us upside down a lot. In the outside of the park, we went on a ride that spun us around a tree while we were in swings. After that one, we went on a huge circle that had seats all around the edge and spun around really fast and made us feel like we were about to go straight into the reservoir. It was awesome!

I know that Seoul is mainly known to be a very outgoing city, but the Bukchon Hanok Village is an area where all of the streets are made up of traditional Korean houses and it is all very peaceful. We explored this area for a while by going into little shops, houses, and observatories, and trying some street food. I loved it because it was so nice and quiet and it was so cool to see what traditional houses looked like on the inside and the outside. This is an area that you can not miss while in Seoul.

Every day at Gyeongbokgung Palace there is a changing of the guards ceremony. It involves many colorfully dressed guards marching in synchronized lines, guards waving big flags, and guards banging loud, beautifully designed drums. We had a great time watching this ceremony and because it happens twice a day, you can not miss it while you are in Seoul. You can also walk through the amazing castle grounds and take pictures with the guards at the entrance. 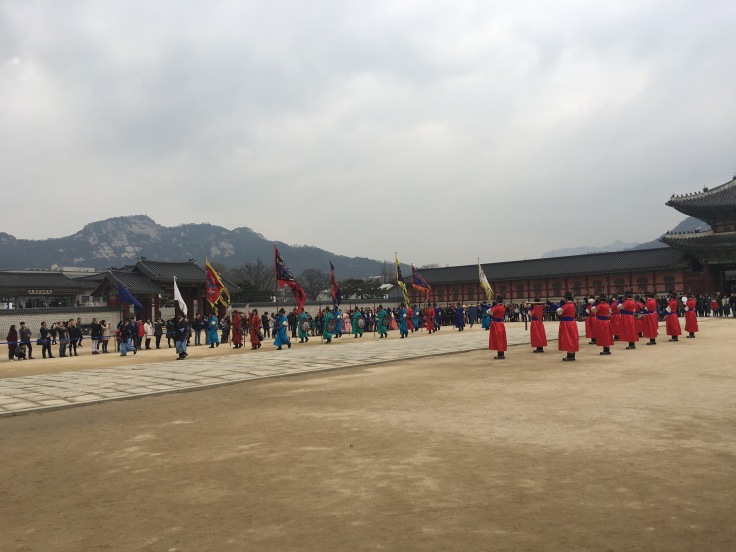 Undoubtedly, the Changdeokgung Palace is the most stunning palace in all of Seoul. With its dazzling architecture, beautiful detail, and awesome hidden buildings, it is a “must see” while you are in Seoul. We spent a while here taking pictures, roaming around the whole place, and really just experiencing a palace that we would probably never see anything like again.

The Trick Eye Museum was a super fun and hilarious way to end our trip in Seoul. At the museum, we posed in front of all types of pictures and scenes and they all look very real and funny. There is really nothing more to say other than it is fun and a great activity for kids and adults.

After the Trick Eye Museum, there is an ice museum that comes with the package. The room is not that big and is FREEZING. Along with all of the ice sculptures, there is an awesome ice slide that I literally went down 20 times! We had a great time exploring this place, but eventually had to go because my mom was freezing!

WHERE TO EAT IN SEOUL.

JOE AND THE JUICE

I know that this restaurant is not Korean, but we just had to have their delicious sandwich and smoothie. Ever since the airport in Iceland, where we discovered it, we have been craving this restaurant so much that when we found it in the mall by our hotel, we started screaming. My mom, my sister, and I all got the same avocado sandwich and I also got a banana smoothie. Just trust me on this one. Joe and the Juice sells one of the best sandwiches in the whole wide world!

The Flying Pan is a great brunch restaurant in Seoul that has the best pancakes. I ordered the banana pancakes and their famous green grape juice. They were both delicious. The pancakes were fluffy and came with bananas and whipped cream, and the green grape juice was pretty sour, but good.

You’re probably thinking, “Why on earth did they not eat any Korean food!?” Well, to answer your question, we had a lot of Korean food, but sometimes Americans just crave their own country’s food. Mr. Holmes is in Los Angeles, but we’d never been, so we just had to try it. We shared 3 different pastries, one being a donut, another being a cruffin, and the last one being a cronut. Lets just say that they were INSANE!

WEATHER: IN WINTER, WHEN WE WENT, IT WAS ALWAYS AROUND 30 DEGREES FAHRENHEIT.